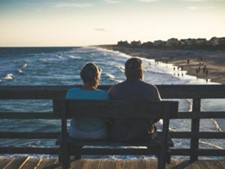 Retirement planning around the world – good or bad?!

A survey of more than 20,000 people around the world has found some interesting statistics about how we plan for retirement. Jillian Thomas takes a look.

I always say planning for retirement is the difference between it being the longest holiday you have ever had or the longest period of unemployment.

And the earlier you start planning the better. After all no-one wants to spend a long time poor. Which is why you might find some international research about retirement planning rather interesting.

According to Schroders 2020 Global Investor Study, when asked about where they invest disposable income, 25 per cent said investing in a pension was their top priority (ranging from 22 per cent in Asia, 25 per cent in Europe and 28 per cent in the Americas). This is up from an overall figure of 10 per cent in 2017.

Interestingly in 2020 only six per cent said their top priority was to spend spare cash on luxury purchases (for example holidays, vehicles, special occasions) compared to 11 per cent in 2017.

Does this show around the world we are planning ahead more and splashing the cash less? Perhaps it does. And perhaps this is no bad thing!

The survey is of over 23,000 people who invest from 32 countries, including Australia, Brazil, Canada, China, France, Germany, India, Italy, Japan, the Netherlands, Spain, the UK and the US.

It also found that more than half (55 per cent) don’t believe their country’s state pension is enough to live on. Just 19 per cent thought it would be. So, all the more reason to save for retirement!

On the downside 41 per cent worry their retirement savings won’t be enough. But on the positive side the proportion of income people are saving towards retirement has actually gone up in the last few years.

The figures are fascinating, and perhaps the most important take-away from them is the need to plan and the need to invest. But the research did also find that around 40 per cent of people are confused about planning for retirement. If that is you – we are only a phone call away, so please do get in touch.